The Burning River: From US Border to Magazine Cover

If you have ever wondered why ENPAC is located in Cleveland, let’s just say it is no coincidence that the town is also home to one of the Nation’s most infamous rivers, the Cuyahoga. Throughout history, this negative association has not always been the case. In fact, per the Treaty of Greenville in 1795 that ended the Northwest Indian War, the Cuyahoga River effectively became part of the western boundary of the United States.

Over the next 200 years, however, the river gained relevance for much less pleasant reasons. Starting with the industrial revolution, waste was haphazardly dumped into the river near its terminus at Lake Erie. This, coupled with major dredging operations, turned the Cuyahoga into one of the most polluted rivers in the United States. In fact, the stretch from Akron to Cleveland was completely devoid of fish. With a plethora of pollutants present in the water, the river first caught fire (literally) in 1868. This would happen 12 more times before major change was enacted, with the largest fire in 1952 causing over 1 million dollars in damage.

Yet, even this level of environmental impact wasn’t enough to effect change. The fires were largely ignored by local media and politicians, so as not to bring negative publicity to the thriving metropolis. The Mohawk Indians probably never envisioned the double meaning when they called this waterway “crooked river.” It wasn’t until 1969 when a river fire was documented by Time magazine, that real progress began to occur. Perhaps that was due to the article calling the Cuyahoga the river that “oozes rather than flows.” Certainly not Cleveland’s proudest moment.

Like a Phoenix from the ashes, though, the city has bounced back over the years as the fires eventually led to monumental policy changes. Following the 1969 ignition, lawmakers recognized the need for more stringent environmental policy. The result was the Clean Water Act, the Great Lakes Water Quality Agreement, and the creation of the Environmental Protection Agency. Though water quality has continued to improve in the decades that followed, pollution still poses a threat.

In 1988, in light of such legislation, ENPAC was founded on the premise of creating high quality spill containment solutions that protect the environment and users alike. 30 years later, we are still located just outside of Cleveland, and remain dedicated to providing superior products and services. 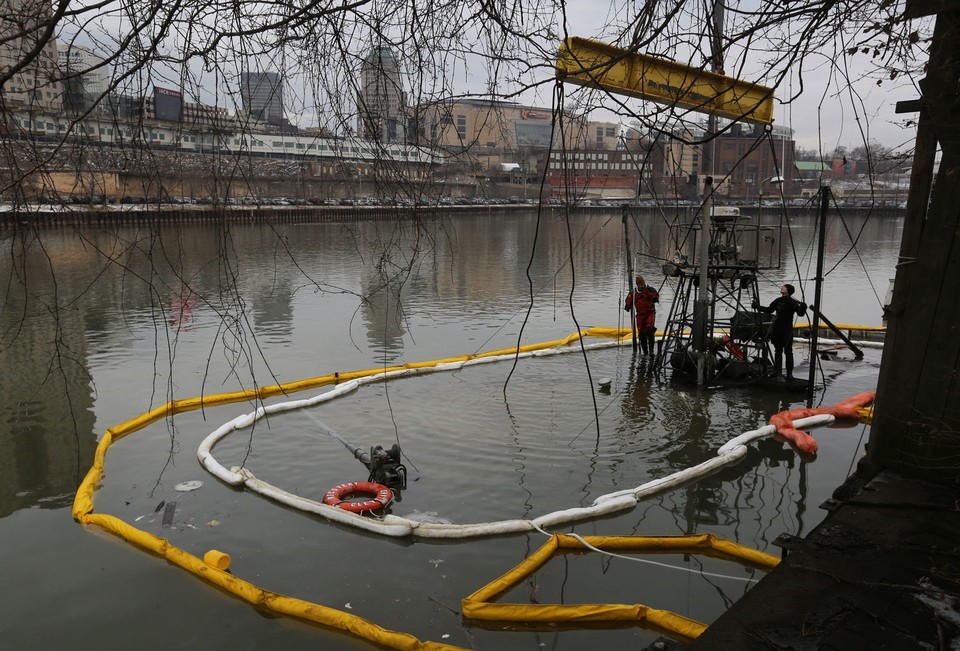 As policy continues to develop, we are fortunate to have a network of valuable distributor partners that share in our mission. Recently, Samsel Supply, a local distributor in Cleveland, shared an article showing some sorbent and containment boom being used on the Cuyahoga during a vessel recovery operation. While it may have taken a series of disasters to set laws in motion, the end result is a cleaner, safer environment for all. Without this blemish on Cleveland history, who knows where ENPAC would be today. We are proud to call this city home, to manufacture in the United States, and to continue our mission of protecting the environment, and your bottom line.